You are itching and your skin is red and swollen. You know you had gotten bitten by an insect. However, you have no idea which type of bug and bitten you. It is important that you are aware of the type of insect that had come in contact with you.

Firstly, if you have a tick bite, that can be indicative of the possibility of developing Lyme Disease. Secondly, it is important to identify which type of insect had bitten you because it could be a sign that you have an infestation. And you will want to have that taken care of as soon as possible. Let’s go over 13 bug bites that are identifiable. 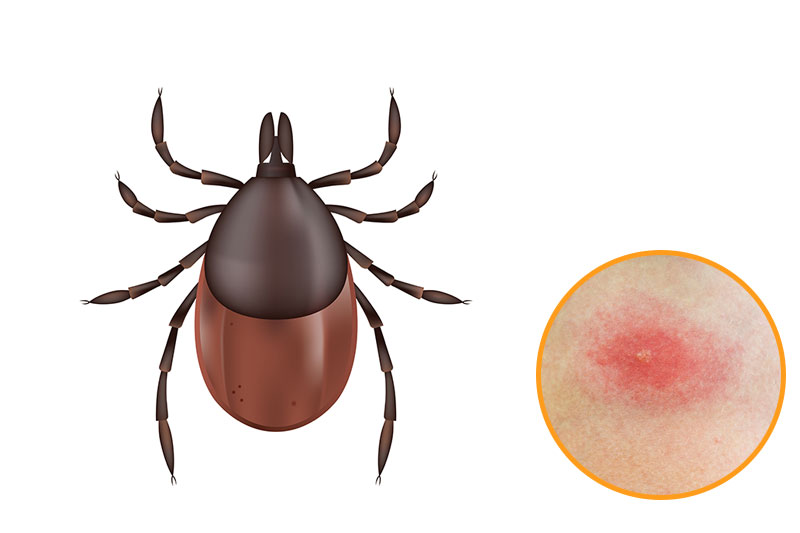 If you have a tick bite, it looks like a bulls-eye and it is quite red. This is the rash that is seen in those who have Lyme Disease. Rocky Mountain spotted fever is another disease that you can contract from ticks. However, if you were bitten by a tick and no infection resulted, then it may appear to be a small circle that is red that has a little bit of itching as well as swelling. It is important to have those bites looked at by your doctor either way. 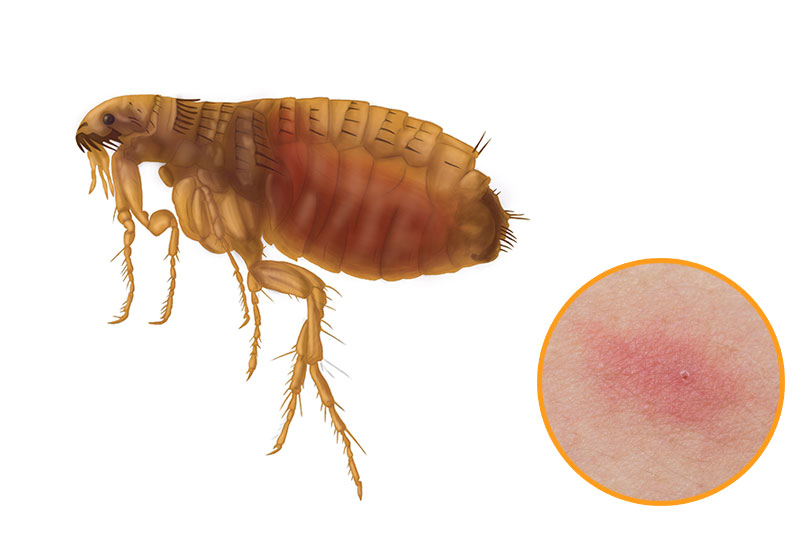 Flea bites have the appearance of scattered and small hives that can turn white if you press on the bite. They are very itchy but are harmless. However, some fleas still are known to carry the plague-causing bacteria. The plague still is been caught by people in the southwestern USA but with antibiotics, the bacteria will be wiped away. 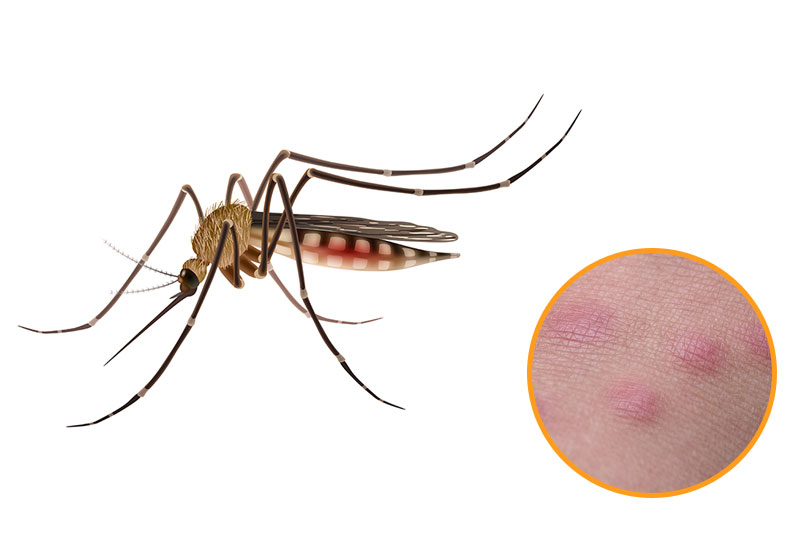 It is easy to determine if you have been bitten by a mosquito as their bites appear to be puffy, and pink. They are extremely itchy as well. You will not feel anything as you get bitten but minutes later, the bump and the itch will appear. Mosquitos do not have venom but can carry diseases such as West Nile and Zika. 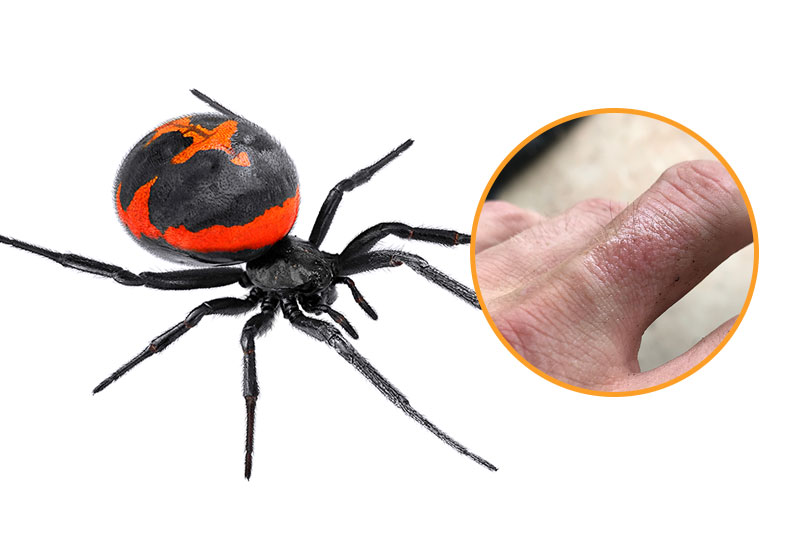 Spiders are technically arachnids and not insects but the black widow spider leaves bite marks that appear as they are 2 fang marks which they are. They are small red marks that can be swollen. However, they can cause health problems such as muscle pain, breathing problems, and stomach problems. Contact your doctor if you think you have been bitten by a black widow spider.

#8 – Hornet Or Wasp Stings Are Red And Swollen 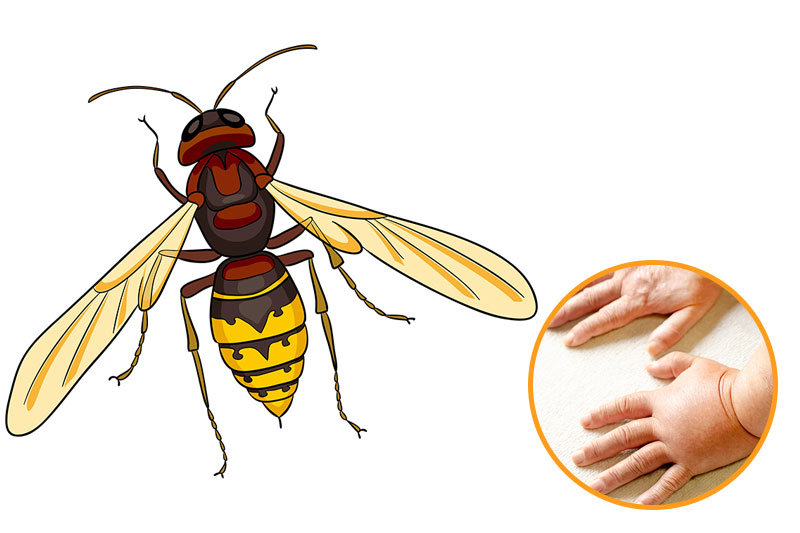 Bee stings are painful and hornet or wasp stings are even more so. They leave a red and swollen area. The stings can calm down after a few hours but sometimes they can last for a week. 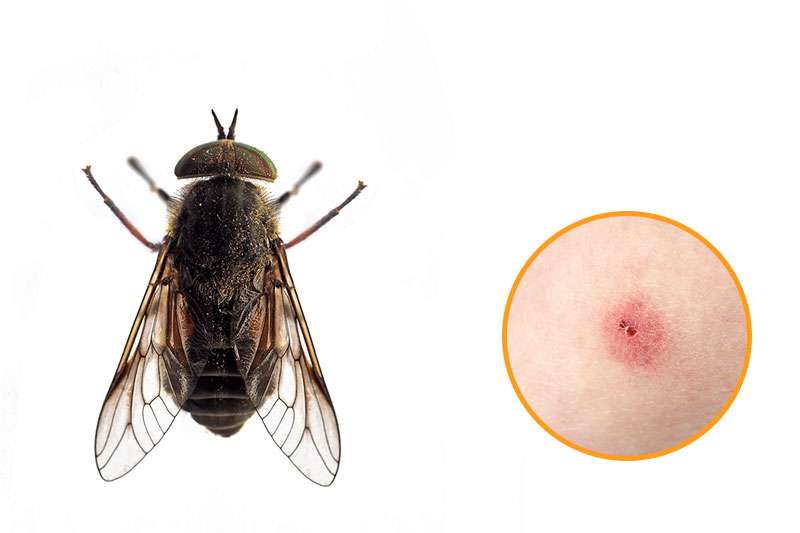 If you live in rural areas, you could see horseflies and their bites are extremely painful and dangerous. If you are allergic to them, then you could end up with swelling and shortness of breath. They leave red circle marks and have a pale center as well.

#6 – Bee Stings Give The Appearance As Hives 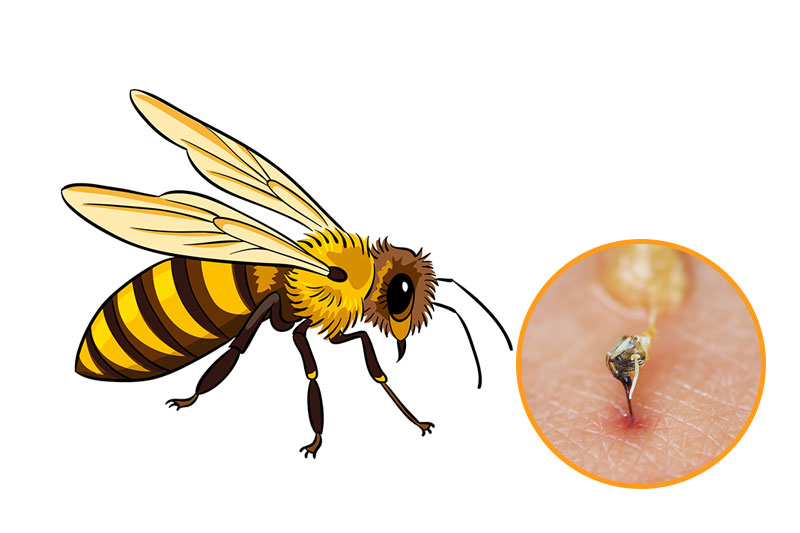 If you have been stung by a bee, you will have hive-like appearances in the affected area with a red dot on the top. However, if you are not allergic to bee stings, it will hurt but the swelling will go down in hours to a few days. If you are allergic, you could have anaphylaxis which can lead to death. Other reactions can involve nausea, dizziness, and trouble with breathing. It is always best to be looked at if you have been stung by a bee. 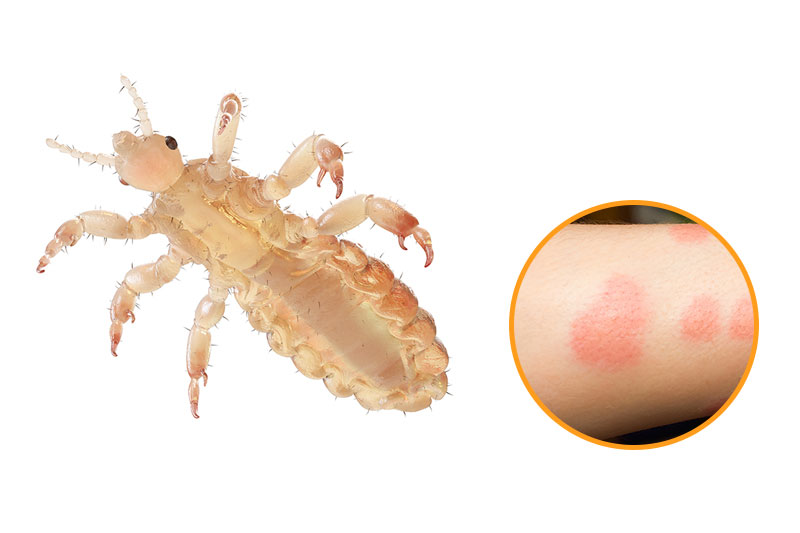 Bites from lice are too small to be seen. However, they do itch and they can itch terribly. Head lice don’t carry diseases but body lice can. They do jump from one individual to another but they only live for 48 hours. 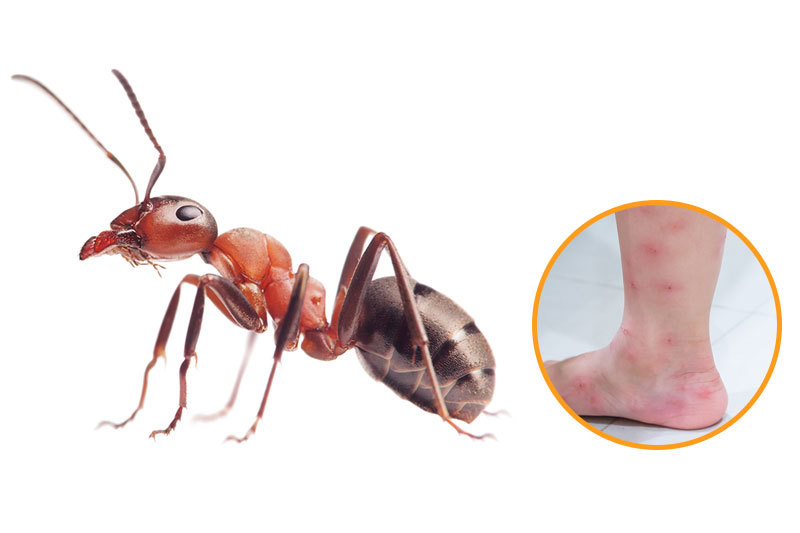 If you have been bitten by an ant, it would not be a small black ant as they don’t bite. However, fire ants, sugar ants, and carpenter ants do and those bites are very painful. Fire ant bites can cause blisters and cause a white pustule on top of the blister. Try not to scratch ant bites as they can become infected or result in scarring. Bites from ants can resolve within a week. 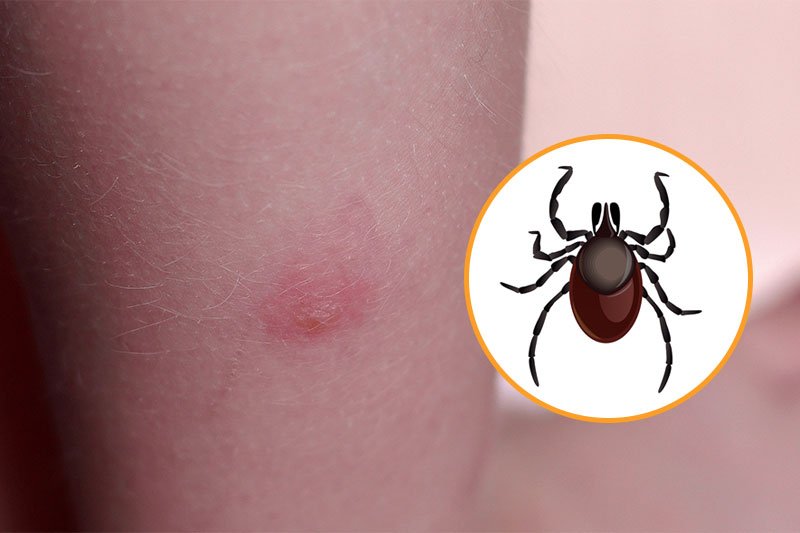 If you have been bitten by bites, they will appear that you have rashes all over your body as they are red dots and are terribly itchy. One type of mite is the chigger and they can liquify skin around the bite so it can be eaten. The skin will harden when this happens. The danger is that mites can cause scabies. 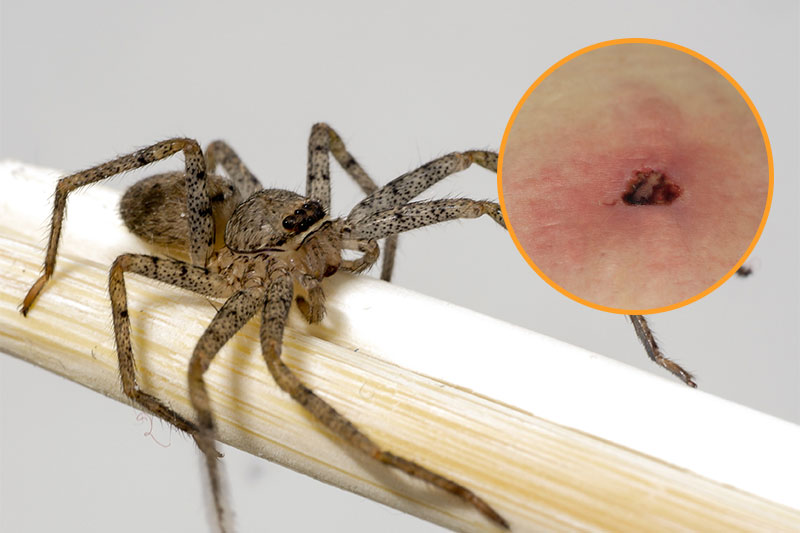 Brown recluse spiders live in the southeastern and midwestern USA and their bites can be very dangerous as young kids under 7 can die from them. These bites are painless but over time they can appear as if the area of the body is bruised and ca have a blister that is light-colored appear in the center. The bites can also appear crusty. And severe pain and itching will happen several hours after the bite. Other symptoms such as nausea, fever, and muscle pain can also happen.

Be sure to have the bite treated immediately as if they are untreated it can lead to kidney failure, seizures, and coma. 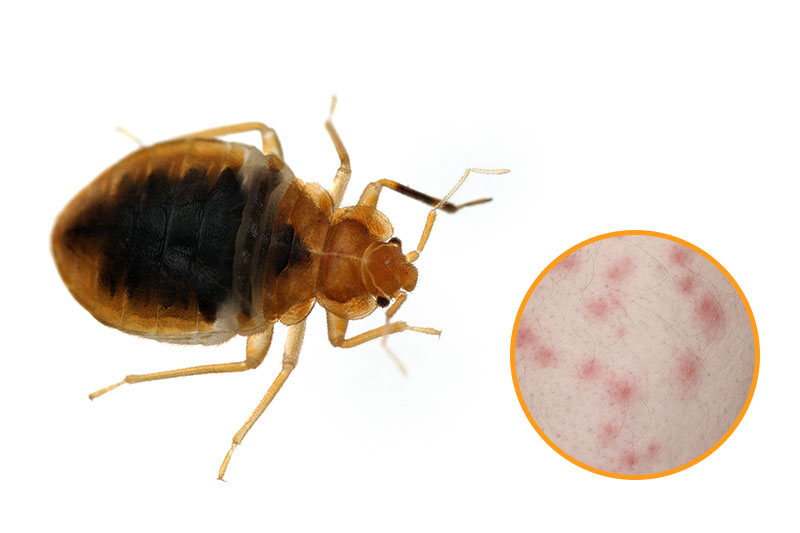 If you have small bites that appear as a line, then that is a sign you have bed bugs and that is never good news as that is a sign of an infestation. These bites are itchy but those who have a severe allergic reaction will end up with a strong itch that can go up to 3 days. Call your pest control company if you are suspecting bed bugs are in your home.

Now you know what type of insect you were bitten by, and in some cases, you will need to see a doctor to get checked. Some bites can turn deadly.