You notice that when you put an earring in your ear that there is a strange small bump behind it. You don’t remember feeling it before, and you would understandably be worried about this. And at the same time, you would be relieved that the bump is behind your ear and not in front where others can easily see it. That is because it would make you self-conscious for understandable reasons. 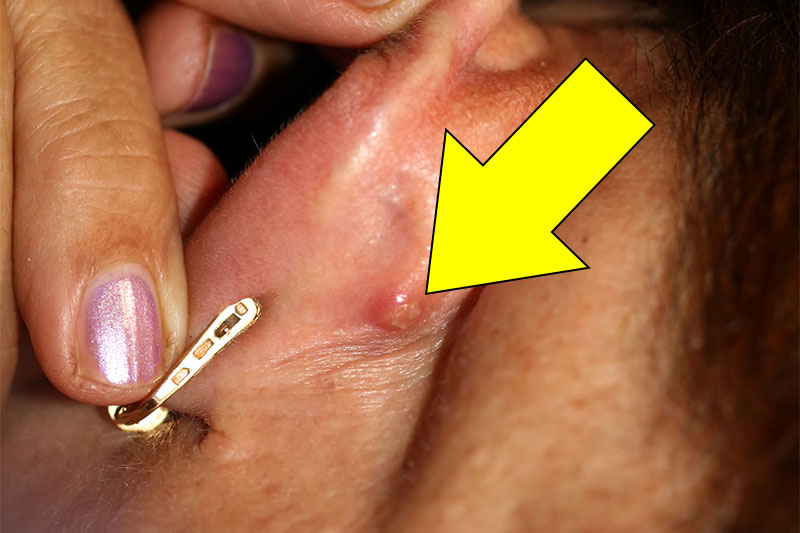 However, more than worrying about the appearance of the bump, you would be concerned that it is something to worry about. There is a much greater chance that there is nothing to worry about with the bump than there would be. However, you still want to have it checked as in some cases treatment may be necessary depending on the cause.

What does the strange bump behind your ear mean? There are several causes for it.

A lipoma is a lump made of fat that can form in between skin layers and it can happen anywhere in your body. It is not unusual for lipomas to happen at the back of your ear and they are not painful and they are not at all serious. Lipomas can however grow, and you will detect them when they are large enough to be felt by your hand. You do not need to have it removed as lipomas are harmless however, you want to still make sure that the lump is in fact lipoma and it is not something else that could be more worrisome.

You hear of acne forming mostly on your face and your back, however, acne can form on the back of your ear as well. Even though acne can be painful, it is nothing to worry about as eventually, it does disappear. Acne forms when your pores and hair follicles in your skin become clogged by bacteria or excess sebum. They turn into large bumps and you can go to a dermatologist to get a solution that will treat the acne if that is what the bump happens to be.

Sebaceous cysts are benign cysts that form underneath the skin and it is common for them to develop in your neck, head, and torso. This type of cyst forms around the sebaceous gland which produces sebum or oil which keeps your hair and skin lubricated.
These types of cysts are painless but can be somewhat irritating and uncomfortable depending on where they form on your body.

It can be uncomfortable if you are brushing your hair and the bristles hit the cyst. The same goes for the bump behind your ear caused by acne.

When your lymph nodes are swollen, then that is known as lymphadenopathy. Lymph nodes are small structures that are throughout your body, and they are also behind your ears. They can become swollen for a variety of reasons. Sometimes they just swell up for unknown and harmless reasons. But eventually, the swelling goes down.

Frequently your lymph nodes will swell up after you have had an ear or throat infection. Therefore, if you had either an ear or throat infection, and you have a lump behind your ear, then this is expected to happen. However, during the rare occasion if the lymph node remains swollen, then you may have cancer. That is why you always make sure that the bumps are checked.

Lumps behind the ears can develop due to infections and abscesses. You would know if that is the case as an infection or an abscess would cause the lump to be painful. They need to be either drained or treated with antibiotics as you never want to ignore either of those.

There is a much greater chance that a lump behind your ear is benign and harmless than it would be otherwise. However, even so, you want to make sure that you have it checked. You never want to take a chance when it comes to a strange growth on your skin, or under your skin. Even if it is a benign situation like acne, you would want to have a treatment for it for the sake of clearing up your skin. Therefore, see a doctor about the lump but there is no need to assume the worst unless you are told otherwise.