Hawaii is a popular tourist destination because it is associated with sea and sand; plus it is the 50th state of the Union and has been since August 21st, 1959. Americans can go to Hawaii without really leaving America. However, the reality is that Hawaii is quite a remote tourist destination since it doesn’t actually share any borders with America. Hawaii has Japan, which is located to the North and Australia to the South. Here are some other fun and interesting facts about Hawaii. 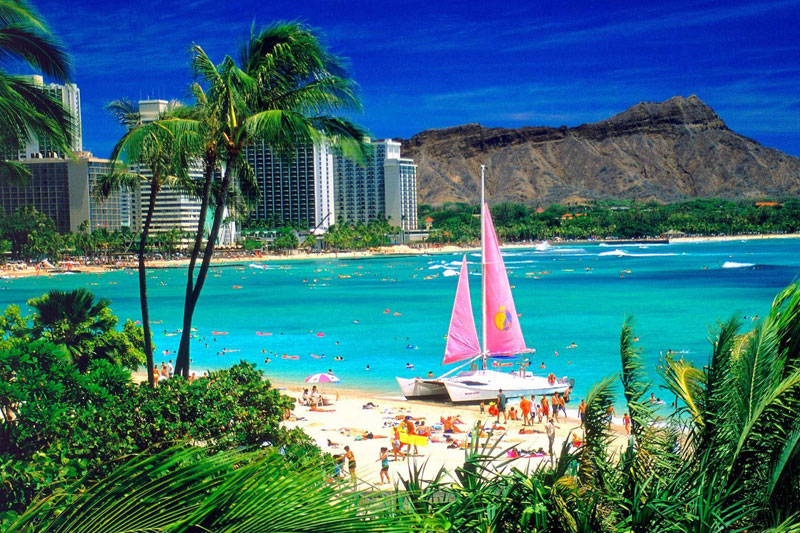 Is Hawaii a single island?

No, Hawaii is comprised of lots of smaller islands and the big island of Hawaii itself. The smaller islands are Kahoolawe, Lanai, Molokai, Maui, Oahu (the island on which the state capital, Honolulu can be found), Kauai, and Nihau.

What makes Hawaii different from the rest of the US?

Its location sets it apart since it is the only state which is not geographically a part of North America. Indeed, it is actually 2,390 miles from California. There are other unique features of Hawaii since it is the only US state to possess a royal palace. Plus, there are no straight lines in the state boundary, and it is surrounded by water. Hawaii is also the only US state to grow coffee. Hawaii has no major racial or ethnic group and is the only state in the US where the majority is non-white.

How did Hawaii get its name?

Captain James Cook initially decided to call the islands Sandwich Islands in 1778, but after King Kamehameha, I united the islands, the islands became known as the Kingdom of Hawaii. Hawaii also has the nickname of the Aloha State. Aloha is a Hawaiian word which can be used either when saying hello or saying goodbye.

What language do Hawaiians speak?

There are two official languages spoken in Hawaii, English, and Hawaiian. The Hawaiian language differs from English in that there are fewer letters in the alphabet. There are only twelve letters: there are seven consonants – H, K, L, M, N, P, W, and five vowels.

What can tourists do in Hawaii?

As well as lazing around on the beach, there are also other sights to behold. For instance, one of the largest active volcanoes can be found in Hawaii, Mauna Loa. Plus, tourists can take a trip to see the tallest mountain in Hawaii, Mauna Kea, a mountain which is actually bigger than Mount Everest when measured from the base that can be found on the floor of the Pacific Ocean.