People love the flavor and zip that ginger root can add to their favorite dishes. But gourmet cooking isn’t the only area in which humans have found a purpose for this versatile plant. Ginger root can also provide medical benefits, as well as being put to many different uses according to the region where it grows. There are various purposes that people put ginger to, and the benefits that it can provide as well as, time tested, dosage that both children and adults should receive in order to find relief from certain medical problems. 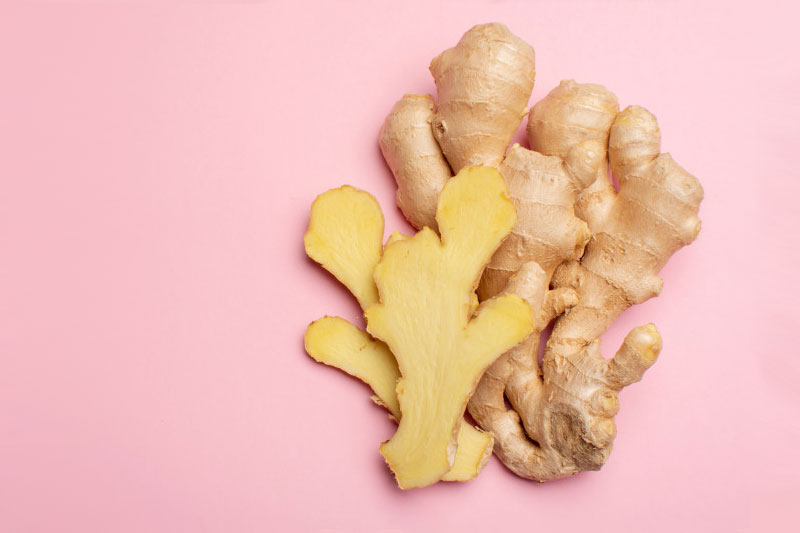 Ginger’s scientific name is Zingiber officinale and belongs in the Zingiberaceae family. In technical terms, it is a monocotyledonous perennial, which means that it has only one leaf when it first begins to germinate, and its growth cycle continues for at least two years at a time. The part of the plant that we call the “ginger root” is actually only the edible part. It is technically the plant’s horizontal subterranean stem, which grows underground and appears to be thick and knotted, as well as being beige in color. The part of the plant above the ground usually has a length of about twelve inches. It has long and narrow ribbed leaves, in a shade of green, as well as flowers that appear either yellowish-green or white.

According to one school of thought, ginger root originally appeared in China, and from there it spread across southeast Asia and to India, then to West Africa and finally to the Caribbean islands. It grows the best in moist, fertile tropical soil. Ginger root can provide us with volatile oils as well as phenol compounds such as shogaols and gingerols, which give ginger its “hotness”.

The health benefits of ginger root

Medically, it can be a great help to settle your stomach. It can help treat dyspepsia, colic, heartburn, and gas. It increases the amount of saliva that you produce, as well as the enzyme amylase, which help with digestion. It can reduce the effects of motion sickness without having any side effects such as drowsiness or dry mouth. One gram, taken daily for no more than four days, can be very effective in reducing the nausea and vomiting associated with pregnancy. Beyond this, ginger can decrease the amount of pus found in boils and infected wounds, and a ginger extract taken two times a day decreased the amount of pain and the need for painkilling medication among those suffering from osteoarthritis.

How are ginger used around the world?

In kitchens all over the world, ginger is also a popular ingredient. In the west, Ginger candy can be used to flavor cakes, cookies (including gingerbread, ginger snaps, and ginger biscuits) as well as ginger ale, which is non-alcoholic. In France and the United Kingdom, however, it can also be used to make ginger-flavored liquor and green ginger wine. Young ginger root can be stewed in boiling water to make ginger tea, with honey, lemon fruit or sliced orange added to sweeten the taste.

How to add ginger to your daily diet?

In some parts of the Middle East, it is used as a flavoring for coffee. In India it has many different purposes: to flavor tea or food for pregnant or breast-feeding women, as a spice in lentil and pulse curries, and, when mixed with lemon juice, salt and tender green chilies, as a part of the preparation of fresh pickle. In Myanmar, ginger root is used in gyin-tho, a type of salad dish, and old ginger root is used to flavor mutton or seafood dishes in China. In Korea, ginger root is finely minced and added to the paste before fermentation when making Kimchi. There is a very popular beverage in Indonesia called Wedang Jahe made from palm sugar and ginger. Even listing all the different culinary uses can make your mouth water.

Ginger in the form of supplements

In addition to all the benefits listed above, there are many uses for ginger specific to certain regions of the world. In the western world, for example, dried ginger root is powdered and sold in capsule form – specifically in the United States, it was judged safe by the Food and Drug Administration since it falls under the dietary supplement category, which is not regulated. In the Ivory Coast, there is a juice called Nyamanku made from ground ginger blended with lemon, orange, and pineapple. Tangawisi juice is made in the Democratic Republic of the Congo from crushed ginger mixed with mango tree sap.

In India, ginger is used to treat colds and headaches. Ginger boiled with Htan nyat, which is made from palm tree juice, is used to help treat the flu in Myanmar. The Chinese also use ginger to treat colds, by slicing it and cooking it in sweetened water. Jahe, a ginger preparation, is used in Indonesia to control poor diet, lessen the effects of fatigue, and treat rheumatism.

How much ginger should you consume?

So how much ginger should we consume in order to receive these benefits? Most simply, adults should take no more than four grams a day. This amount was calculated for an adult weighing 150 pounds, or 70 kilograms. A child should take half as much as an adult – so if the child weighs 75 pounds or 35 kilograms, they should take no more than two grams of ginger. No child under the age of two years should take ginger. In children, ginger can be used to treat digestive cramps, nausea, and headaches. Adults can take two to four grams of ginger extract, juice or tea to lessen the pain from arthritis. One gram of powdered ginger every four hours and no more than four times a day can prevent vomiting. Two to four grams of ginger root or 1.5 to three ml of liquid extract daily can help to treat gas, nausea or indigestion. In order to relieve the effects of menstrual cramps, headache, flu, sore throat, or cold, steep two tablespoons of freshly shredded ginger in hot water and drink, two or three times a day.

Ginger have been in used for thousands of years

Ginger can be used in both cooking and as a remedy for a number of different medical conditions. People all around the world have adapted its use for their own purposes throughout the centuries. Who knows what use we’ll come up with next?