The Slinky was invented by an airplane mechanic; he was playing with engine parts and realized the possible secondary use of one of the springs.

Back in 1945 when naval engineer Richard James was tinkering with some tension springs, he had no idea that dropping a steel coil, would lead to the invention of one of the world’s most enduring and beloved of toys, the Slinky. 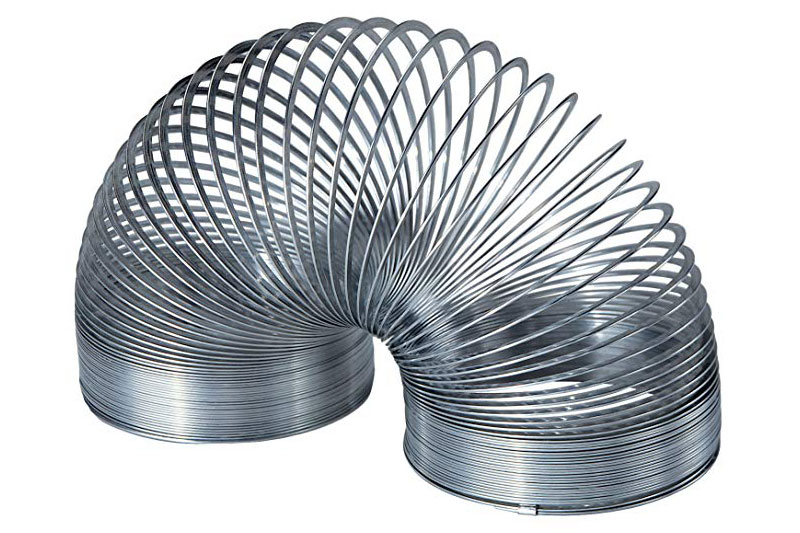 When the spring slipped from his fingers, it hit the floor and turned end over end, bending while it did so. James was so intrigued, he took it home to his wife, and repeated the action, asking her afterwards, if she thought it had a future. If they’d only known!

It was his wife Betty who conceived the idea of a toy, and by browsing through a dictionary, came across a Swedish word meaning “sleek and sinuous”. That word is now part of American lexicon- the Slinky.

It was introduced to the world at the Philadelphia branch of Gimble’s Department Store in 1946, and much to the James’ surprise, the 400 that had been manufactured, sold out in less than two hours.

The childhood staple has changed little over the years, being the same metal, spring-like flexible fun that it always was, with the exception that crimps have been added to the ends as a safety feature.

Over time, Slinkies have been used in physical and occupational therapy, and as antennae, by soldiers in Viet Nam. In 2001, the sleek and sinuous, sprightly spring, was named Pennsylvania’s official state toy.