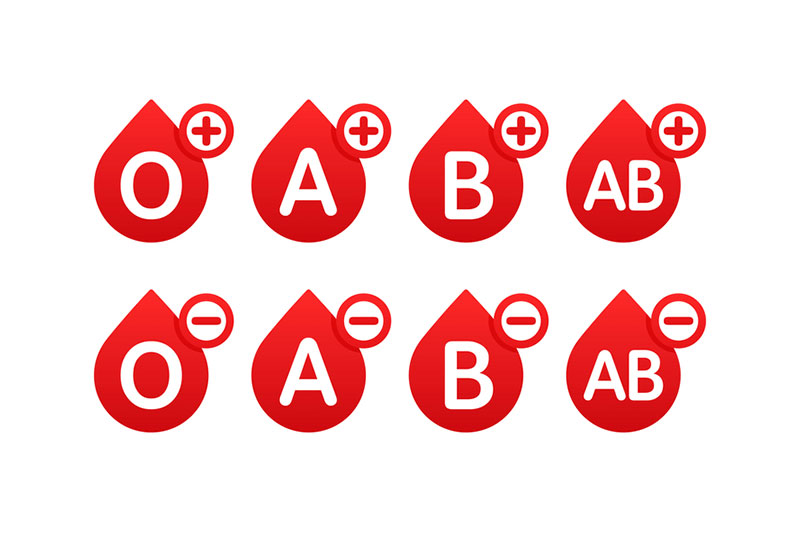 But in order to understand the “whys” of blood types, we should first try to understand their “whats”. The basic blood types are referred to as the “ABO” group, and everyone’s blood falls into one of four types, A, B, O, or AB. This fact was discovered by an Austrian scientist named Karl Landsteiner in 1909.

Landsteiner discovered two chemicals (antigens) that were present on the surface of red blood cells, which he imaginatively named “A” and “B”. His classification system was simple. If the blood sample contained the “A” and “B” chemicals, it was type AB, if only one it was A or B and if neither, O. Now you can see why declaring all blood to be of one of four types wasn’t really as impressive as it seems, since there are always only four possible combinations of two different decisions-in this case “A” and “Not A” and “B” and “Not B”.

However, it was still a very important finding, and it did suffice to get Landsteiner the Nobel Prize in medicine. Only thing is, it turns out not to be the whole story. There is also an “Rh” factor, otherwise known as antigen D.

Now they could have done the same thing with this as with A and B, making types O, D, A, B, AD, BD, AB, and ABD, but instead they decided to add a “+” for Rh positive, and a “-” for Rh negative. Therefore, most people think of their blood type as O-positive, A-negative, etc. But lest you think that this is the only way to define blood types, there are also a bunch of other antigens, such as C, E, c, e, M, S, Le, K, Fy (aka Duffy), and Jk. Therefore to someone who really cares about such things, your blood type is a pretty long series of more or less impenetrable symbols.

But who are these people who really care? And why do they care, anyway? Well, people like the Red Cross care, because when people receive blood it is important that the blood not be positive for antigens that they lack. Your body’s immune system is set up to seek and destroy foreign cells, since the vast majority of the time those foreign cells are will do you no good and possibly considerable harm. If the immune system sees an antigen on red blood cells that it recognizes as foreign, it will cause the offending cells to clump together for easier removal.

Unfortunately, this clumping can be a potentially fatal problem when you are dealing with a pint of invading cells. Obviously, this is not the most brilliant of responses for a truly intelligent immune system, but frankly, when in nature would you ever receive a pint of foreign blood into your circulatory system?

Keep it to the ABO system

So if you going to dump a whole lot of red blood cells into someone’s body, they should contain either the same set of antigens that the person has or a subset of them. To keep it to the ABO system, this means that if you are AB-positive, you can receive anybody’s blood, since your own cells contain every antigen, whereas if you are O-negative, you can only receive O-negative blood since your cells have none of the antigens at all. AB-positive is therefore considered the universal recipient, and O-negative the universal donor.

The reason why we generally ignore antigens C, E, M, etc, is that even people whose red blood cells are missing these antigens generally don’t have antibodies for them. Starting in infancy, the immune system creates antibodies to foreign antigens that it comes across, and it turns out some of the bacteria that quickly colonize an infant’s intestines express antigens which are strongly A-like and B-like.

Why all of these different blood types exist?

If there was a real advantage to being A-positive, for example, there would be significant selection pressure in favor of it and it would tend to spread throughout the population.

For “A”, “B” and “Rh”, the antigens are present in 42%, 15%, and 82% of the population of the US (remember, they are not mutually exclusive). Their prevalence varies noticeably in different populations around the world. Why? If a relatively closed population happens to be founded by a group of people with a particular prevalence of blood types, that prevalence will remain more or less forever.

There is at least one exception to this ‘blood type doesn’t matter’ idea. The Duffy antigen (named for the patient in whom it was discovered) is very common in many populations. Over 96% of Caucasians, for example, are Duffy-positive.

However, more than 90% of West Africans are Duffy-negative. Research suggests that malarial parasites are able to hijack the Duffy proteins to invade blood cells, so Duffy-negative individuals have a certain amount of natural immunity to the disease. The fact that populations which do not face much exposure to malaria are so overwhelmingly Duffy-positive suggests that the protein offers some benefit to those who have it, but it is not entirely clear yet what that benefit is.

And as for the other blood types, the fact that they exist in significant numbers in almost all populations suggests that they don’t matter much, and the different forms persist because there is little evolutionary reason for them not to.

Yeah, I know it isn’t really that interesting an explanation, but frankly the truth is usually a whole lot less interesting than a nice, satisfying lie.