Glass. You’re looking at it right now. OK, I admit that there is a dim chance that someone, somewhere, may have printed this article out and is therefore looking at a piece of paper instead, but even if true, the vast majority of you are looking at glass right now. We spend much of every day staring through glass, but for most of us, the stuff is out of sight out of mind. You never really look at the glass, and you probably never really think about it, although I bet there are a few facts you think you know about it which are not ‘facts’ at all.

Most of us have a dim recollection of learning that glass is actually a liquid, not a solid, and that glass flows ever so slowly over time. The first of these ‘facts’ is only half right, and the second is almost completely wrong. Glass is not actually a liquid but an odd state of matter called an amorphous solid. What does that mean? Most solids take the form of crystals or other regular structures. Ice, diamonds, metals, and ceramics all have their atoms in a regular, repeating pattern.

Glass (as well as most plastics and some other materials) do not display these regular structures, with the atoms arranged in a somewhat random pattern. Whether it is an official state of matter is not quite clear. Going from liquid to crystal involves a first-order phase transition and the difference between the two states ia a discontinuous one. Water is liquid or vapor or ice, and it isn’t hard to tell them apart. Amorphous solids, however, have a more gradual transition which makes the whole thing a bit fuzzier.

Materials scientists amuse themselves by arguing whether glass is the ultimate extension of a polycrystalline solid or something else entirely. While I’m not sure how amusing the argument actually is, the idea is that most solids have flaws in their crystalline structure. Rather than being a single giant crystal, they consist of a collection of individual crystals—also called domains—and where they meet, the regular pattern of atoms is lost. If you were to make the individual crystals really, really small—only a few atoms apiece—then the solid would basically be one big flaw and you’d get something that looks an awful lot like glass at a molecular level.

In principle, you can make a glass out of any liquid that is capable of solidifying (this rules out helium, but not anything else I’m aware of). The molecules in a liquid exist in a disordered state. If you cool the liquid down faster than the molecules are capable of ordering themselves into crystals, the disorder will get ‘frozen’ into a glass. In the case of a lot of materials, this is easier said than done.

Water, for example, crystallizes so fast that it is almost impossible to make it into a glass by normal means, although amorphous ice is created and used by scientists in small quantities for a few purposes. The glass that we think of as Glass is composed largely of silica, with smaller amounts of sodium carbonate, calcium oxide and a few other substances. Take these ingredients, heat them up to a couple of thousand degrees and then cool the resulting liquid faster than the crystallization time which in this case is pretty slow, and you’ve got glass.

Sounds easy, huh? In a way it is, but shaping the glass into something useful is a bit of an art form. Actually in some cases it is completely an art form, as you can see in the work of the glassblowers of Venice among other places. Glass can form pretty much any shape, and it turns out that a flat sheet is one of the trickiest.

Until the 19th century, ‘flat’ glass was generally made by taking a blob of glass on the end of a rod and spinning it to flatten it out into a more or less flat plate. The resulting glass was never perfectly flat and window makers would try to ensure that the thicker end of a pane of glass was put at the bottom of the frame. This is almost certainly the source of the story that glass flows over time, since the panes of glass in very old buildings are almost invariably wider at the bottom than they are at the top. But an occasional pane will be wider on a side or the top when a window-maker got careless. 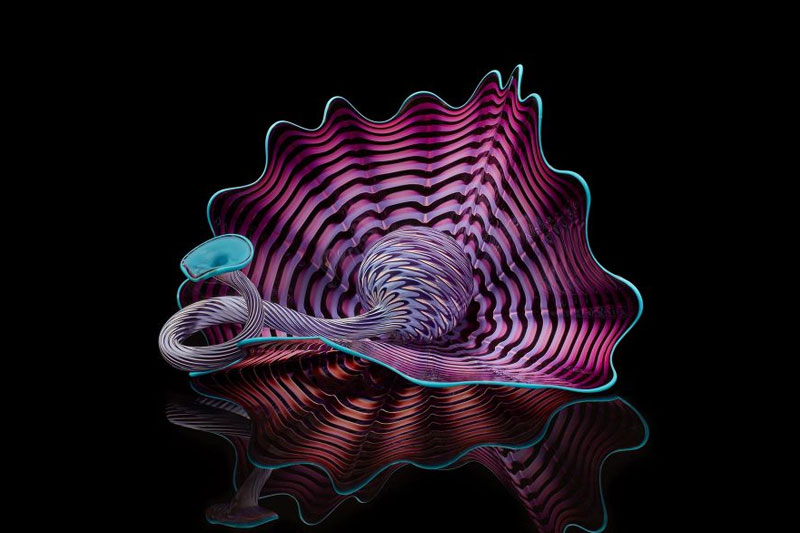 In the 18th and 19th centuries, a couple of better methods came about, but neither was perfect. It wasn’t until the 1950’s that Alistair Pilkington developed a practical float glass process that could make perfectly flat smooth glass of pretty much any size.

The secret was to float molten glass on a ‘bath’ of molten tin. The surface of the tin will be perfectly smooth and flat due to gravity and glass will float on top of it, neither reacting with nor sticking to it. Molten glass placed over the tin will naturally form a flat ribbon and as it moves along the bath it is gradually cooled to around 600 Celsius, at which point it has solidified enough to be picked up by rollers. The glass is then cooled slowly so that it has relatively few stresses in it (this process is called annealing) and cut to desired size and shape.

This is not necessarily the end for the glass, however. Much glass, like that used in oven doors, pot lids, car windows, and skylights, then goes through a process called tempering. Glass is pretty wonderful stuff, but it does have some bad habits. First, it is pretty brittle, and has a tendency to crack when struck or heated unevenly. Second, those cracks are really sharp and pretty dangerous. Tempered glass solves both of these problems simultaneously. Glass is much stronger in compression than tension.

This strengthens the glass and makes it more scratch-resistant and heat-resistant in the bargain. Another method is chemical tempering, in which sodium atoms on the surface of the glass are replaced with potassium atoms, which are significantly larger. This also puts the surface in compression, and can be done with glass of complicated shapes that would not survive heat tempering.

One interesting effect of the tempering process is that tempered glass doesn’t just crack. When tempered glass encounters a big enough stress, it shatters into small granules. If the integrity of the surface of the glass becomes compromised, the interior, which is under huge tension, basically disintegrates. This is much safer than big nasty shards, but does make the glass suddenly an awful lot harder to see through. This is one reason why the windshield of your car is not made with tempered glass, but laminated glass. Laminated glass is made by bonding two or more layers of glass with an ‘interlayer’ which will hold the pieces together if the glass should crack.

Tempered glass is an extremely useful material, but it does demand some planning. Because of the fact that tempered glass is an all-or-nothing breakage proposition, you’ve got to have already determined the size, shape, and any holes you want in the glass before you temper it. There’s no shaving things down to fit afterwards. Tempering as an industrial process started in the 20th century, but it was a party trick far before that. One of the first examples of tempered glass is something called Prince Rupert’s drops, named after the Bavarian prince who brought it to the attention of the court.

If you let a blob of glass fall into a bucket of water, it will form an extended teardrop shape with interesting properties. The bulbous end of the drop is tempered and can withstand extreme force, such as hitting it with a hammer. The tail, however, is very delicate, and if broken, the whole thing will shatter into tiny pieces. Rupert apparently amused himself by placing the drops in the hands of visitors and snapping the tails, leaving them with a handful of shattered glass.

Such was the state of entertainment of 17th century Bavaria, I’m afraid. But you’ve got to admit the things are pretty cool, you can see in the following video.

When you think about it, the fact that every video you’ve ever seen was projected through glass, the fact that this is probably one of the very few you’ve seen about the stuff is a bit odd, but that’s glass for you. It’s odd stuff.