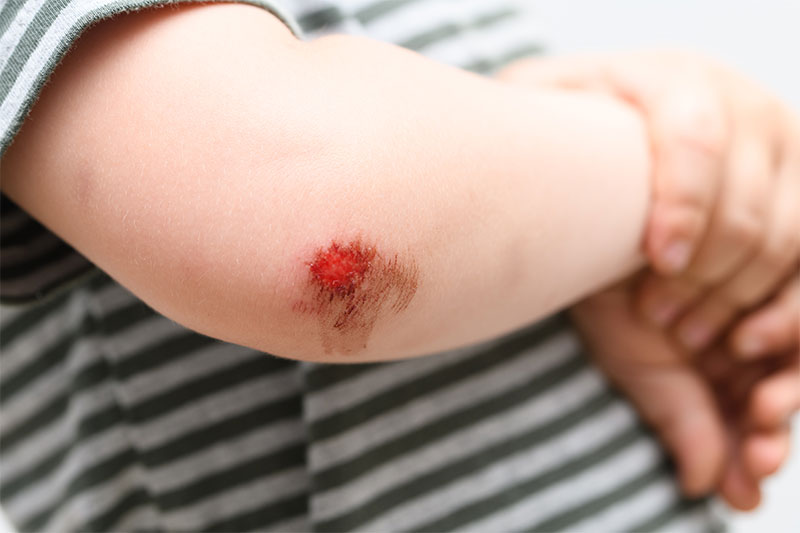 Everyone gets cuts, and everyone gets scrapes. Kids are notorious for cutting themselves by falling on concrete, and then they end up with small scrapes on their knees. Often times they get their parents to wash it and to put a bandage on it, many times whenever you get a cut you tend to ignore it. You figure it will stop bleeding and the clotting agents of your blood will do their job. However, that is not good enough. If you get a scrape and you end up with an open wound, you must always cover it even though it will stop bleeding. Why would you have to cover a minor cut while you know it will stop bleeding?

There is not only one reason for this so there are several. One reason being that for the cells to grow properly, there must be moisture in the area. Secondly, a bandage keeps the cuts protected from outside germs. Let’s take a look at both of these reasons in detail first.

The fact of the matter is when you leave an open cut, there is no moisture covering it that you would have inside of a bandage. The old belief was that it was better for a cut to air out, but that is actually not true. The open air does not help cells regenerate as the healing happens a lot slower if you leave a cut open. When you place a bandage over the cut, it will seal off the air and the inside of the cut will remain moist which is how the gauze inside of the bandage helps the healing happen. If you notice that when you take off the bandage after a day, your cut is pretty much healed with fresh skin covering it. That is because the moisture inside of the cut allowed the cells to generate more easily.

Compare having a cut and covering it with a bandage to not covering it at all and allowing it to dry on its own. If you take a look at it covered the day after, you will see that the cut is almost gone, as long as was very minor. However, if you look at the cut that was left open, you will see a scab and you do not see any new skin covering it at all. That is because the cells did not have the opportunity to thrive. That right there is one reason you need to have the bandage.

Why Is It Important For Skin To Grow Right Over The Cut Quickly?

Therefore, if you leave a cut open, not only are you not giving new skin the opportunity to grow over the cut, but you are allowing harmful microbes to have the opportunity to enter your body through the wound. You do not want to take a chance with that happening even if nothing has happened in the past. Therefore, a cut can lead to serious illnesses like sepsis for that reason. If you get a cut, no matter how minor, put a bandage over it. You will be glad you did!